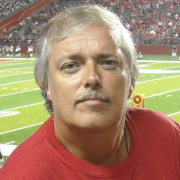 Brian de Castro
Brian was born in East Orange, NJ, and grew up in Parsippany, NJ. After graduating from Rutgers University, Brian began working at NBC in New York, eventually as a production assistant, and then writer and producer in the promotions department, working on Saturday Night Live, Late Night with David Letterman, Conan O’Brien and Jimmy Fallon, The Tonight Show with Jay Leno, The Today Show and more. He was honored by The Academy of Television Arts and Sciences for contributions to the Emmy Award winning achievement for outstanding writing for a variety, music or comedy program, for Saturday Night Live in 2002 and Late Night with Conan O’Brien in 2007.A lifelong Yankees’ fan, Brian pitches and plays third base in an over-35 NJ baseball league, and has played in China, Russia and Italy.Brian’s a staunch environmentalist, wildlife conservationist and gun control advocate, and, of course, loves and lives horror, running his own website, Gore4.com