0
Go to the tapes: Unlocking a tragic and terrifying 25 year old mystery.

An archivist hired to restore a collection of tapes finds himself reconstructing the work of a filmmaker and her investigation into a dangerous cult.

Netflix started off 2022 with a bang in the horror genre series section!

ARCHIVE 81 is Netflix’s latest horror fiction series that released on the streaming platform on January 14, 2022. I had read an article a few weeks prior to the release announcing this series. As soon as I read the synopsis and found out Mamoudou Athie was going to be the lead I was sold! Mamoudou recently came out in the Amazon original horror/sci-fi “Black Box,” that I really enjoyed and he had a great performance! I also almost forgot he played Grandmaster Flash in the Netflix show, “The Get Down,” which is another series I am upset that got cancelled after the first season! Going into this series knowing the lead was going to be great, I wasn’t surprised how awesome this series was!

The series was developed by Rebecca Sonnenshine and executive produced by the horror master James Wan! The series is based on the podcast by the same name, about researchers cataloging the video archive of a missing filmmaker. In this series we meet Dan who is a conservator, he repairs cassette tapes and video tapes for a living. He restores this Hi8 tape that shows Melody, a young woman who’s filming her PhD dissertation on an apartment building called ‘The Visser.’ This tape was shot in 1994, so we get two timelines: one that takes place in the 90s and another in the present time. From there Dan does such a great job at restoring the tape, he gets hired by this rich and powerful man Virgil Davenport of L.M.G., Virgil invites him to fix the rest of the tapes. He tells Dan the tapes were burned and damaged in a fire that happened in The Visser apartment building back in 1994. From there the mystery unravels. It is a slow burner the first few episodes, but then it picks up!

I don’t want to spoil the series since it is fairly new and some may have not watched it yet. All I will say is there is a cult, 90s nostalgia, a bit of Rosemary’s Baby vibes and Jacob’s Ladder insanity since you tend to not know if what Dan is seeing in these video tapes are real or his mind is playing tricks on him! This series plays more mentally with your mind. It is not scary, but it definitely had its eerie and creepy moments. Highly recommend this series! The only thing is it leaves off on a cliffhanger. The cast was great as well! Enjoy this horror trip back to the 90s!

I hope Archive 81 gets a second season!

An archivist hired to restore a collection of tapes finds himself reconstructing the work of a filmmaker and her investigation into a dangerous cult.
8.1

Archive 81 is a slow burner that builds up gradually! It takes you on a trippy ride through the occult and even time travel! 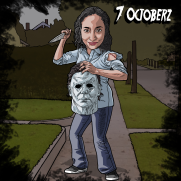