LATIN HORROR is please to relaunch one of its most beloved filmmaker engagement projects from its original analog site: SCENE AUTOPSY, where we showcase a sample scene from a horror filmmaker’s film along side the scene’s script sides and have a constructive cinephile discussion about the post. Simple enough. But seeing how it went from script-to-screen—and subsequent participant’s varied takes on the content and related input—is a ton of fun, and a great film school! Here’s how it works:

Select a film you have made, AND

1. Provide an artistic statement about the work, including some behind-the-scenes information about the production. (200 words or less).

OR, Upload your clip to either Youtube or Vimeo and provide us with the link (public viewing option, no password protection).

4. Provide the related script sides/pages for the scene (as a PDF file).

5. A high resolution still from the movie that will be used as the featured cover image.

6. Provide us with the content via We Transfer or Dropbox to: sceneautopsy@latinhorror.com

We will create a dedicated SCENE AUTOPSY page on LATIN HORROR (website) for your submission, and share it via our social media and in our e-newsletter.

Then folks can READ the Script | WATCH the clip | DISCUSS.

Don’t worry, we wouldn’t leave you hanging without the benefit of a reference sample.


Only mediamakers subscribed with LATIN HORROR can participate (it’s only fair) — http://latinhorror.com/subscribe

REVIEW: ‘Visceral: Between the Ropes of Madness’, a gory Chilean art-film 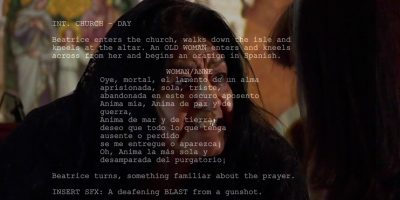