At the top of the year, Variety listed the genre phenom on its “10 Latinxs to Watch 2019” list. Shortly after, she directed an episode of the Into The Dark TV series for horror heatwave Blumhouse (@blumhouse). The episode, ‘Culture Shock,’ focused on a young Mexican woman who crosses illegally into the United States in pursuit of the American Dream, only to find herself in an American nightmare. The episode fittingly premiered on July 4th, and reached a 100% Fresh rating at the review-aggregation website, Rotten Tomatoes. As a result, Blumhouse signed Guerrero to an exclusive “First Look Film & TV Deal,” and immediately tossed her into the weeds to direct an episode for The Purge TV series (@ThePurgeTV) called ‘Hail Mary‘ (season 2, episode 9), which just premiered December 10th.

Now, the Canadian-Mexican writer/director, and Latin Horror Ambassadoress, has taken it to the next level with a line of merch created for THE PURGE TV COLLECTION, and also assumes the mantle of designer! Released under the banner of “PURGE NIGHT FEELS,” the line features a short-sleeve t-shirt (in black or white), a long-sleeve hoodie with a comfort pouch (black or white), a handy spiral-bound notebook, and iconic mask. The tee, hoodie and book come emboldened with nine emoji-style icons based on the mask from the Purge franchise that reflect a series of emotions that qualify the theme: happy, sad, aroused, amused, cute, grumpy, surprised, expired, and sarcastic.

Peep the the entire line at the Blumhouse Shop. And don’t forget to snag some swag for those special ghouls on your “naughty” list just in time for the purge! Ah, we mean…holidays. 😉

Below: Captures from the ‘Hail Mary’ episode of The Purge TV series, directed by Gigi Saul Guerrero. Point your web browser to USA Network to watch. 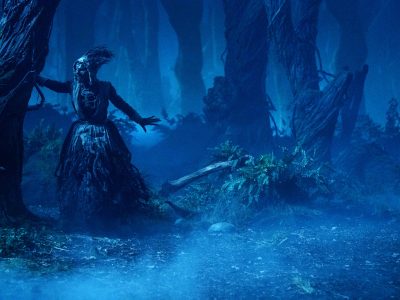